I bring you The Bard, himself:

Let me not to the marriage of true minds
Admit impediments. Love is not love
Which alters when it alteration finds,
Or bends with the remover to remove:
O no! it is an ever-fixed mark
That looks on tempests and is never shaken;
It is the star to every wandering bark,
Whose Worth's unknown, although his height be taken.
Love's not Time's fool, though rosy lips and cheeks
Within his bending sickle's compass come;
Love alters not with his brief hours and weeks,
But bears it out even to the edge of doom:
If this be error and upon me proved,
I never writ, nor no man ever loved.
–William Shakespeare

From hell's heart, I stab at thee. For hate's sake, I spit my last breath at thee.

Ricardo Montalban has passed away, aged 88. His most memorable role was as Khan Noonian Singh, the mad genetically-engineered superman who took on Kirk and the Enterprise on two occasions. Firstly in TOS episode Space Seed, and then in Star Trek II: The Wrath of Khan, in which he very nearly won. His final scene where he lay dying on the shattered bridge of the Reliant , but still spitting out his hate at Kirk, is an absolute classic. Khan could so easily have been a two-dimensional cutout but Montalban brought the character to chillingly convincing life.
RIP, Mr Montalban. 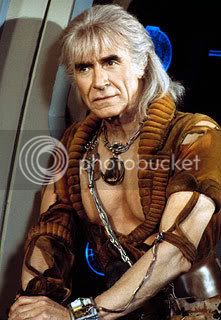 quote above originally from "Moby Dick", but also Khan's last words as he died.
Collapse